Amish, Mennonite communities in Pennsylvania may have achieved group immunity 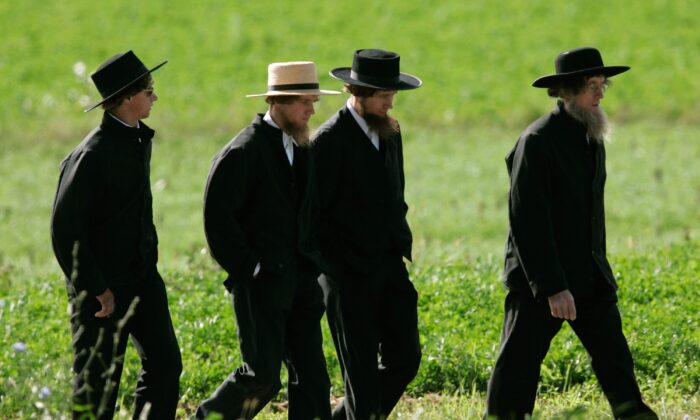 According to a local health official Amish- and Mennonite communities in a Pennsylvania county have achieved immunity to the CCP virus.

Allen Hoover, an administrator at the Parochial Medical Center in the heart of the Amish community in New Holland Borough, Lancaster County, said he believes that in as many as nine out of ten households in the local Amish and Mennonite communities have at least one family member is or has been with COVID -19, the illness caused by it CCP virus (Chinese Communist Party) .

He said he believes this is an indicator that COVID-19 group immunity within the communities.

So you'd think if COVID was as contagious as they say it would go off like a tsunami; and it did, ”Hoover said, reported The Associated Press .

At the peak of the outbreak, nearly 15 percent of the Parochial Medical Center's daily patients were those who tested positive for COVID-19, Hoover said.

Cases then declined over the summer, with a slight increase in the fall, he said. Now, the medical center hasn't seen a visitor with COVID-19 symptoms in about six weeks, Hoover noted.

The Plain community in Lancaster County, home to both approximately 40.525 Amish and 5.700 Mennonites, represents a significant portion of the county's population. Combined, it represents nearly 8 percent of the county's 545.000 residents, according to estimates by Elizabethtown College's Young Center for Anabaptist and Pietist Studies. The Parochial Medical Center has 33.000 active patients.

Group immunity occurs when a sufficiently large proportion of the population acquires immunity against an infectious disease - either naturally from previous infection or transiently through vaccination - that it no longer spreads.

At the start of the pandemic, the Amish and Mennonite communities in Lancaster County canceled church services on the basis of an order to stay at home. But last April, the services had resumed, where they shared communion cups and greeted each other with “holy” kisses.

“It was bad here in the spring; one patient right after another, ”said Pam Cooper, a doctor's assistant at the medical center.

However, some public health officials and epidemiologists have expressed concern that a misguided perception of group immunity in a population that makes up 8 percent of Lancaster County could jeopardize the attempt to turn the tide of the pandemic.

Sweden: No lockdown, no mandatory measures
The Swedes themselves, on this point, have great confidence in the government. People generally follow the non-mandatory instructions. While most countries shut down their economies to “fight the coronavirus”, Sweden has left the country open. Now Sweden has always had its borders wide open and the big cities are […]

"You can have a long period of time where you think everything is okay, but you have a whole population that is susceptible," said David Lo, professor of biomedical sciences and senior associate dean of research at the University of California, Riverside.

Lo added, "It only takes one person who is contagious to deliver a sudden outbreak."

Hoover agreed with the epidemiologists. He added that while some in the Plain community may no longer feel the need to follow COVID-19 public health guidelines due to their perception that COVID-19 cases have been reduced, he still believes people should pay attention. spend on preventing any spread of the virus.

"We have to be careful not to be the cause of the spread," said Hoover.

Since the start of the pandemic, Lancaster County on March 29 974 COVID-19 deaths and 47.430 confirmed cases recorded from those who consented to testing. Of the nearly 1000 deaths, only 42 were from people under the age of 60. Nearly 50 percent of victims of the CCP virus died in nursing homes, 44 percent in a hospital and about 6 percent at home.

Experts still don't know what percentage of the population must be immune to achieve group immunity. Dr. Anthony Fauci, a top medical adviser to President Joe Biden and former President Donald Trump, has estimated, however that at least 70 percent of Americans need COVID-19 vaccines before herd immunity is achieved.

Dr. Francis Collins, director of the National Institutes of Health (NIH), said last week at The Hill  that the achievement of group immunity depends on whether people hesitant to get the COVID-19 vaccine can be persuaded by 'trustworthy votes' to take the vaccine for the time being.

Whichever way they tell you, it is and will remain "THE FLU"

Spanish
wpDiscuz
1
0
What is your response to this?x
()
x
| Reply