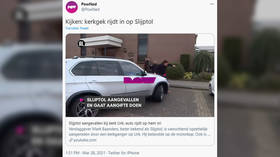 Dutch news crews were attacked in two cities on Sunday while interviewing members of Protestant churches who defy the restrictions of Covid-19. A man was arrested on suspicion of driving a journalist in.

A news crew from broadcaster RTV Rijnmond was attacked in the town of Krimpen aan den IJssel, where they arrived to interview believers outside a Protestant church that, despite the ongoing lockdown of Covid-19, had opened services for the entire congregation. The TV station said the reporter was pushed from behind and then kicked in the stomach.

The pain has gone but I am still shocked - I was attacked during my work this morning by a churchgoer in Krimpen @RTV_Rijnmond - more on this https://t.co/5yHj38zkri - file a declaration first pic.twitter.com/8VJR5np17j

Police arrested a 43-year-old man after the incident. Journalist Jacco van Giessen said he was “shocked” by the attack. "I did not expect this in Krimpen on Sunday morning," he told the media after the altercation.

The religious group that owns the church has issued a statement apologizing “to anyone who has been hurt” and asking its members to be peaceful. At the same time, the group blamed the media for "the weeks of mounting tension" surrounding the church.

An almost identical scuffle took place the same day in the city of Urk, where a group of men repeatedly kicked Mark Baanders, a reporter for the TV channel PowNed.

a journalist in The Netherlands was getting beat while he wanted to interview people that went to the church on a Sunday while there is a maximum on how many people are allowed to go to the church. #urk #powned pic.twitter.com/pFNHzUjDCh

Baanders was also hit by a car in a parking lot outside the church. "I thought the driver was going to stop, but he accelerated," said the journalist. He was not injured.

Police took a 35-year-old man into custody on suspicion of deliberately running a car into reporter Baanders.

A few more local residents were filmed acting hostile to Baanders, with some angrily pushing away his microphone.

The Dutch Association of Editors in Chief said the violence against journalists threatens the freedom of the press and Is “unacceptable”. The group criticized the police for not intervening earlier.

Meanwhile, a spokesman for the church in Urk, H. Snoek, accused the journalists of this "Behave like terrorists" en “To look for sensationalism as much as possible” in instead of gathering information. "They blocked the doors and pushed a microphone into children's faces" , he said.

Mass media is Mind Control
Adolf Hitler and Hermen Goring in Berlin in 1943 This contribution is from our guest author: Manfred Smol | Newscloud22 | February 2, 2021 | Some big globalist entities (billionaires from the big corporations and from the banking system) drive the world population as if it were livestock to which they believe they have all the rights to and everything […]
Follow us on social media