The old world goes into the ravine

Johannes Bloemsma of Nourishing Destiny was a guest at Radio Glacier to talk about the I-ching, the Nine Star Ki based on it, consciousness, the old world that is still very much around, the new world that is slowly manifesting itself. becomes, Yin and Yang, his experiences with Ayahuasca and 'cosmic humor'. […]

Fred Teunissen is founder of the popular website TransitieWeb and joined Radio Glacier to talk about the Akashic Chronicles, 5G, decentralization, the recently published book 'The Truth Is Out There', to which he contributed together with 17 other truth seekers. delivered, and its specialty: chemtrails. Fred is investigating the […]

"It's written in the stars" is a well-known saying, but it's more than a saying. Astrologer Judith Zeeman saw the situation we are in right now from afar. On Radio Glacier she tells that it is all the fault of Saturn and Pluto, who are challenging each other […]

Aliens are in the Bible

Quinten Makkinje has been studying the UFO phenomenon and everything that goes with it for 25 years. He regularly goes out with other ufologists and holds special ceremonies (in which meditation plays a major role) to come into contact with flying saucers, orbs and extraterrestrial life. He was a guest on Radio Glacier, where he […]

There is life after and before death

On the sixth day of the newest spiritual radio station in the Netherlands, Radio Gletsjer, spiritual therapist and energy worker Joke Nauta is a guest. In her practice De Libbensbeam (Frisian for 'The Tree of Life') she receives many parents with children, lovers with relationship problems, people who want to get out of the 'rat race', and people who have difficulties with the […] 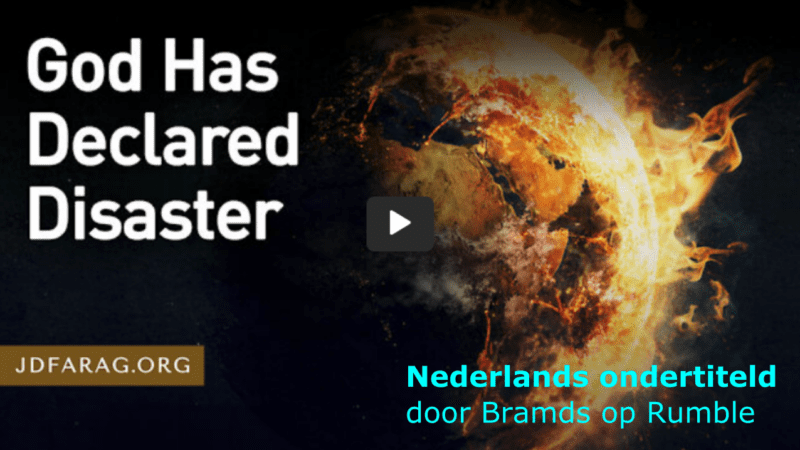 Are we in the End Times? Pastor JD Farag's view on this is clear: YES This article was produced in collaboration with a guest author. We undeniably live in a special but also confusing time. The COVID-19 'pandemic' but also severe natural disasters attributed to climate change determine the daily news. Social unrest and polarizing […]

BIG TV NETWORK FILLS OUT OF ANTI-COVID VACCINE The Daystar Television Network (commonly referred to as Daystar Television, often abbreviated to Daystar) is an American evangelical Christian religious television network owned by the Word of God Fellowship, founded by Marcus Lamb in 1993. The network reaches more than 108 million homes in the US through all major cable companies and satellite systems. Worldwide, Daystar daily reaches more […]

A powerful message from Jerusalem that everyone should see!

By Avalerion Awakes On Wednesday, May 5, an International Unity prayer meeting was held in Jerusalem to pray against injecting children with experimental Covid-19 genetic vaccines. The event was live-streamed and hosted by the Common Denominator. The Common Denominator was founded by activist Ilana Rachel Daniel. She is […]

A Canadian minister from Calgary, Alberta sends 6 police officers out of the church who tried to stop the Easter service because of the “zum kotzen” cojona rules. When the police mask army with their “Befehl ist Befehl” mentality arrived, the pastor called the assisting police officers Gestapos, Nazis, fascists and psychopaths who celebrate the holiest day of […]

Archbishop Robert Altier: It is time we started to see that we are being lied to

Minnesota Archbishop Robert Altier said in a high-profile Sunday speech that COVID-19 was made by humans and released to the public to make people sick. That's how the media brought it, but this sermon went much further. I know we have many religious people who visit our website every day. But whether you […]

Sunday Mass by an awake pastor

It is Sunday. Time for Mass. On Sunday, April 19, 2020, Reverend Pastor Danny Jones of Northlake Baptist Church in Georgia, USA, gave a sharp Sunday Mass on the global corona pandemic. This video comes from our deleted YouTube channel. Almost a year ago but more relevant than ever. Let's listen to it again this Sunday. […]

Sharp Sunday Mass: Is this Coronavirus a sign of the end of the world?

HISTORICAL SUNDAY MISCELLANEOUS DANNY JONES On Sunday, April 19, 2020, Rev. Danny Jones of the Northlake Baptist Church in Georgia, USA, delivered a poignant Sunday Mass in connection with the global coronavirus pandemic. Even if you are not religious/religious, it is so worth watching this mass, where the pastor lays out a tight corona crisis timeline and important […]

A church service in Greenville, Mississippi was broken up by police because church services were declared NON-ESSENTIAL by corona ordinances. The pastor had decided to hold his Bible celebration in a parking lot. The parishioners sat in their cars with the windows closed and the cars were several meters apart. Yet five police cars entered the site to […]