Austrian Chancellor Sebastian Kurz was re-elected as leader of the Austrian People's Party (ÖVP) on Saturday. He was re-elected on the 39th Bundestag Day with 99,4 percent of the vote. A higher percentage than his first election as party leader in 2017, when he won 98,7 percent of the membership.

In his speech to the Bundestag, he spoke about the successes of the Kurz governments, which have been leading Austria since 2017, with a small break in 2019. First with the Freedom Party Austria (FPÖ). That collaboration broke down after a scandal with FPÖ leader Heinz-Christian Strache. After that, he has ruled with the Greens since January 2020, which he manages to control very well, making the Kurz II government a very conservative government.

Sebastian Kurz has a new government!

Kurz opened his speech by stressing that it is great that the Bundestag Day is not a Videoconference.

“I admit it's great that our Bundestag Day is not a video conference. As interesting as it was in the beginning to get to know the living rooms, the cellars, the bedrooms of colleagues, how nice it was also partly to see partners walk by (…), it is the personal contact that is different and I am glad to see you all.” – Chancellor Sebastian Kurz

According to the Austrian 'Profile' the event will go down in Lower Austria's history as the event that reintroduced mass handshaking and kissing.

The previous government of Sebastian Kurz, who sat from 2017 to 2019, had fallen as a result of the Ibiza affair. The scandal surfaced on May 17, 2019 with the publication of a secretly recorded video of a meeting in Ibiza, in July 2017, in which politicians Heinz-Christian Strache, Vice-Chancellor of Austria and FPÖ leader, and Johann Gudenus, Vice-President of the FPÖ, then in the opposition, talk about their party's devious practices and intentions .

In the video, both politicians appear to be responding to proposals from a woman posing as the niece of a Russian oligarch. The opportunity is offered to bring positive news to the FPÖ in exchange for government contracts. Strache and Gudenus also refer to corrupt political practices with many other wealthy donors to the FPÖ in Europe and elsewhere.

After Strache himself decided to resign after this video, Kurz also demanded the resignation of all other FPÖ ministers. New elections were called and Sebastian Kurz himself was evicted with a Motion of No Confidence in May 2019. Kurz went on to win the September 2019 elections.

Austria is heading for center cabinet

“We have to learn to live with the virus”

The Chancellor emphasizes that new restrictions must be prevented and that Austria must learn to live with the virus.

“For the coming months and years; the virus will not go away, we have to learn to live with the virus.”

According to Kurz, “vaccination is the answer, not lockdown anymore.” So Kurz is betting on a lot of vaccinated people, something that seems to work, about 5 million people, 58 percent of the Austrian population, are fully vaccinated. The Chancellor states that the ÖVP should respect those who do not want to vaccinate, but can try to convince them.

Full speech by Sebastian Kurz at the Federal Party Day: 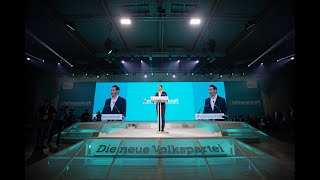 Spanish
wpDiscuz
4
0
What is your response to this?x
()
x
| Reply