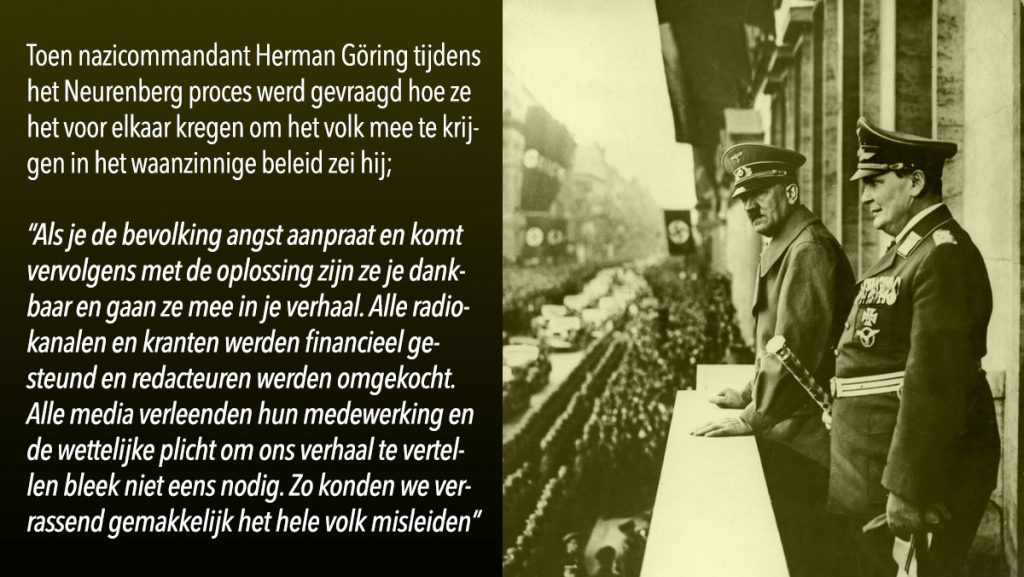 Adolf Hitler and Hermen Goring in Berlin in 1943

This contribution is from our guest author: Manfred Smol | Newscloud22 | February 2, 2021 |

A few large globalist entities (billionaires from the big corporations and from the banking system) drive the world population as if it were livestock to which they believe they have all the rights to and think they can do whatever they think they can. The entire earth is a playground for them, including everything that lives on it. A game that has been played for centuries and originated long ago in royal houses, goldsmiths, and church institutions that all work together (t) and on control of the population and far-reaching centralization of power. Deep infiltration of key positions in the political system, together with far-reaching conflicts of interest with the business community, have always been important strategic core activities. In our time, the company "World Economic Forum LLC" is strategically the central power that has completely encapsulated 90% of all leading politicians, effectively taking over politics without the people even knowing it. Placing a cross in a voting booth is therefore a play to make us believe that the people have influence on the policy of 'higher hand'.

Another very important strategic core activity for gaining control over the population is the control of the mass media. These are (internationally) 99% owned by the globalists from the World Economic Forum LLC). They are the ideal instrument (better said 'weaponry') for doing 'mind control' and perception control. Political policy and plans (structurally in favor of their own hidden agenda and on balance at odds with popular interests) have been accepted for years without much resistance from the population. The public's confidence in the well-known media is unprecedented: "everything the mass media has to say must surely be true?" Everyone is informed by it and that alone is reason for most people not to have to doubt the sincerity of the reporting via this covert weaponry of the elite groups.

Anyone who sees through the lies and ventures it openly is framed in these media as a danger to others and made fun of. Nobody wants to be such a 'madman', and so any opposition - very strategic - is quashed, making it no longer an option for most people. The population even turns against the small critical part.

Because counter-noise does not get a podium in the well-known and 'trusted' mass media and the channels where a podium is given are too unknown, counter-noise is always difficult to hear. Opposition has always made it terribly difficult to reach people in broad sections of the population. The mass media pulls up a cordon and likes to scatter sand.

In corona time, we see the strategic role of Mass Media as a strategic weaponry more clearly defined than ever. The lies and propagandistic tone are so striking. Is Corona Policy For Keeping Us Healthy? If you trust the media (and politics) reporting, you would answer the question "YES". But if you use your common sense, link facts and see what is going on before your eyes, you have to draw the other conclusion; “No, this is not about public health. It's about manipulative power shifting and centralization of power and control. The virus theme is used to manipulate and steer people through fear.

Due to a lack of insight among the majority of the population - of what is really going on behind the curtains - the polarization in our society is increasing rapidly. If the people start to fight and criticize each other, chaos will also increase. It's all part of a carefully crafted plan by the elite groups. The corona measures of the governments have a place in this plan and therefore have nothing to do with public health, but are purely intended to allow what is happening more and more often: the total breakdown of the catering industry, SMEs and small businesses and actually all self-employed. When all the small, medium-sized entrepreneurs and their businesses are completely destroyed, the big billionaires in the bankrupt shambles will take the currants out of the porridge and distribute them among themselves. All for a bargain price

The result: everything is then in the hands of a few large globalists and multinationals who are the sole supplier of all products and services. The entire supply chain can then be controlled and manipulated. The elite groups have completely controlled the financial system for a long time already. Optimal power and control in every corner of our existence will soon lie with a few billionaires. Of course, nothing good can come of that.

Self-employed people will soon all disappear and be destroyed by the measures. State-owned companies and globalists then have everything in their hands, and the population has become slavish cattle that can and / or can do nothing more than what the globalists put on the menu for us. The people should be denied the right to self-determination. On the basis of measures, everyone is obliged to link themselves to the control system of the globalists. No vaccines as we are used to in the past, but chips in your body that permanently affect your physical and mental health. The globalists no longer take possession of a nation or land, but in fact take over every individual body. That's what they are up to. For those who have read the book COVID-19: THE GREAT RESET ”can delve further into AGENDA 2030. There everything is packaged in a timeline and by 2030 the world must be changed to the image of the elite groups of the stakeholder cartel company World Economic Forum LLC

Corona, will it ever stop?

What does our future look like according to the plans of the globalists? You can read it all in the book “COVID-19: THE GREAT RESET” by Klaus Schwab. Seen from their elite throne, they love it, but from a human perspective it's downright devilish. The plans do not serve the population in any way. The mandatory measures to vaccinate everyone against Corona also speak for themselves. Covid-19 has an IFR of only 0,23%, which equates to a severe flu. Mutations of viruses are always less lethal (scientifically established) so every mutation of a Coranavirus has an IFR of 0,20 or even lower on balance, which makes it a common flu. It is also known that vaccines against viruses are never effective because of the mutations. Even the annual flu shots that are offered to the elderly (or rather forced by the GPs because GPs receive bonuses for marketing flu shots) turn out to be effective in only 50% of people at best. And in certain years it is only 10% effective. This is always about the elderly and never about people in the active part of the population and young people, so why now all of a sudden the whole world (including children and babies) has to be vaccinated cannot have anything else to do with goals other than people's health. . The population has long been misled by their governments along with the financial powers and the pharmaceutical industry who all operate under one umbrella. So why should it be any different in this case of Corona? 1 +1 is 2.

Without it there real resistance comes from the population - ever-increasing Corona measures will be a permanent part of society. The chaos caused by the corona measures will form the basis on which society will be transformed into a different model; a model as globalists want it. Further suffocation and restriction of freedoms is normalcy, so that we, the population, have nowhere to go. For example, you can only enter your healthy body (!) Somewhere with multiple annual vaccinations (in a state restaurant, state gym or the like). The border across or further from your home than 25 km is only possible if you have been vaccinated. Family visits are prohibited unless you have been vaccinated. etc etc.

You can immediately start wondering what all those vaccination programs (as a permanent part of our lives have been planned for a long time) are needed for? Is that to keep us healthy? Asking the question is giving the answer “no, absolutely not!”. Would the vaccines forced on us and soon to be compulsory have the same goal as the vaccines against chicken pox 60 years ago? Could it be that the bio and nanotechnology developments of the last 20 years have made a leap, opening up (science fiction-like) possibilities with vaccines that were unimaginable 60 years ago? Maybe answer the question by asking another question. Is the Bakelite telephone from 60 years ago the same as the telephone we all carry today? Or have the developments in nanotechnology over the last 20 years made the telephone something completely different from what we know it from before? Exactly. You have the answer. The globalists possess an unprecedented amount of knowledge and technology that the people are completely unfamiliar with. Anyone who thinks that every new important technological development is widely communicated to the people (through the mass media of the globalists) lives in a total delusion. From a strategic point of view, it would be very foolish to play all your cards and make it transparent to competition and the population. No company does it, so the globalists certainly don't.

Plots, what are we talking about?

HoweAlthough we live in a time when the word “conspiracy” seems to be losing its true meaning due to the context in which that word is used by the mainstream media, this does not alter the fact that conspiracies simply exist. Stay with the facts here too; a conspiracy is nothing more and nothing less than a plan, a collaboration between different parties who do not openly share their goals with those to which the plans relate. That conspiracy thoughts are always based on fantasy is therefore too ridiculous for words. The whole world is a tangle of conspiracies big and small. Example of a small conspiracy: Mom and Dad are both going to celebrate Sinterklaas and Daddy is Sinterklaas, Mom is Black Pete. They are well painted and visit their children's school. The whole class thinks that these are really Sinterklaas and Zwarte Piet ... only the teachers know what is really going on. The children are fooled. A good example of a nice plot. But there are also big conspiracies that are not fun. The 2030 Agenda of the World Economic Forum LLC is a good example. It is a plan to break down humanity in society to utter inhumane proportions.

You may start asking yourself: what is life worth if you no longer have the right to self-determination? What is the quality of life when you have nothing more to say about what you do and have no more room for maneuver. Wouldn't you be better off risking a virus that could cause some elderly people to die a few months earlier at the end of their lives? Is that the price we all don't want to pay? Or is the government fooling us into believing that we are all doing it together and for each other? I think that if you asked the over-85s themselves what their choice would be, the outcome could well have been “please open society and let people live”. And then it may even be a blessing that a virus just gets a chance. A virus can help a person with the final push, to die after a completed life.

The measures are in all cases a complete hell, and for everyone