By an anonymous guest writer

Publish with “Quest for Truth” as a guiding principle Avalerion awakes articles and videos about Covid-19 and associated socio-political developments from the combination of science and (Christian) faith.

For example, after months of research, the 12-part documentary is on CSTV in early April "Covid-19 vaccine biotechnology explained & overview of new technologies and implications" published and explained in full. Both in the Dutch as a English.

In the aforementioned 12-part documentary, in addition to the thorough scientific approach used, it can be seen that the Christian faith has formed the philosophical side of the documentary maker.

That is why it was special that shortly after the publication of a article over the entire documentary the eye was drawn to a very special Easter service by pastor (predecessor) JD Farag. One who leads an evangelical congregation in Hawaii but has gained worldwide acclaim through his weekly treatment of Biblical prophecy through his penetrating treatment of the current perplexing times regarding Covid-19. Pastor JD is convinced that the present time is the end time foretold in the Bible. A prophecy revealed to the Apostle John by God and found in the Book of Revelation in the Bible.

Pastor JD does not mince his words and carefully studies many sources of a political, social and scientific nature. He incorporates his own research into his weekly Prophecy update sermons.

On April 4, 2021, he broke with his 15-year tradition of not giving a prophecy update on Easter out of respect for this important Christian holiday centered on the resurrection of Jesus. He said he had urgent reasons for this. The developments at Covid-19 with its current phase of vaccination and lockdowns are heading for a climax, a real crisis situation. Pastor JD thought he should report this anyway. Rightly so. What he said resonated completely with the conclusions of Avalerion's 12-part documentary.

This is so special that it was decided to provide this sermon with Dutch subtitles and make it accessible to Dutch speakers, so also for people who do not have sufficient command of the English language.

The broadcast can be seen below. We like to leave it to the viewers to draw their own conclusions. The crux of the information that Pastor JD offers is universal and can be viewed independently of the specific philosophy of life that one has. We realize that solutions suggested by Pastor JD may not be understandable or even unacceptable to non-Christians. This is true even for well-Christians too. There are simply many interpretations of THE truth which translates into many denominations. If you want to know more about pastor JD and also watch other broadcasts (in English), you can do this on his website JDFarag.org.

Or watch the special sermon on Bitchute: 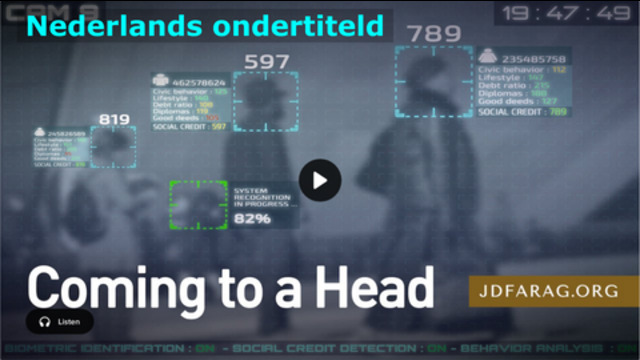 Under the heading of the 'Fourth Industrial Revolution', worldwide coordinated plans (NWO New World Order) are being implemented for humanity, the implications of which are enormous for everyone: “the great reset”. National governments, international organizations, the large business community, universities and the media work together with military precision.

Influencing takes place through a comprehensive globalist step-by-step plan that has been elaborated in every detail and communicated through the media as the only truth. Counter-voices are ignored, ridiculed or even completely censored on as many media outlets as possible. In any case on those channels that are in the hands of the aforementioned NWO parties and to which large numbers of people have been tempted to use them “free” in recent decades: the so-called main stream media (MSM). Through this MSM route people are brainwashed with the narrative of the NWO plans and made into uncritical “followers”.

On the surface, those plans even look "good" because of impressive presentations and "reliable" because of the large number of celebrities and highly educated scientists who come out to show their support. It assumes a Hollywood level.

However, concerned citizens and professionals from all countries and backgrounds have increasingly been awakened by the illogical decision-making of politicians who take draconian measures without proper substantiation. In fact. These measures do much more damage than the solution to the public health problem actually is. Covid-19 seems to be more and more a cover for the real agenda. While the measures are holding the population and companies hostage with unprecedented freedom restrictions, the implementation of “the great reset” continues to bulldoze. Objections are beaten down with a heavy hand, much better solutions are “undisputed” aside.

All these things are of course known to the loyal viewers of CSTV. But those fanned out to which these belong form a sizeable minority, viewed numerically. Many, most of them, are still asleep or - for various reasons of their own - asleep.

Therefore, it is essential that all efforts are directed to presenting everyone with the full, pure facts and answers to crucial questions. Everyone should be able to define his or her own positions on various complex issues regarding Covid-19 as well as the future world. These are universal human rights that we must defend at all times.

In the Covid-19 policy and also in the NWO narrative, the political leaders use a technocratic strategy. The plans and policy choices are based on the state of the art. Or so it is claimed. However, in recent decades, this science appears to have been increasingly influenced by perverse monetary incentives. As a result, a process has been set in motion “from above” to manipulate “truth by science” in the direction desired by the financiers. It is very revealing to realize how badly this bought science has evolved. The corruption virus has infected respected universities and scientists. As a result, we can no longer believe a lot of science “on their blue eyes” on essential points.

Pay attention. We are talking about a process here. And the vast majority of scientists are very honest people who sincerely want to serve humanity. We are talking here about a select upper layer who facilitate the desired narrative through their position of power. It is going too far to go into it here. Perhaps food for follow-up articles and videos.

But how can you make your own decisions in this maze of contradictory information and increasingly imposed restrictions on freedom? Here we hit the point of your philosophy of life. Who do you think you are and who do you want to be? It is not without reason that our earthly abode is overflowing with challenges that compel us to face life's big questions. For example, the Bible calls for “know thyself”, but all major world religions embrace the importance of that quest and offer tools for it.

For Avalerion awakes, science is the objective and pure quest for knowledge about our visible and invisible world, its origin and its functioning. Without any influence on interests other than merely finding the truth. The findings aim for the well-being of ALL on Earth and not that of the fortunate few.

With this article and accompanying video, we intend to argue that science, technology and spirituality are interrelated.

Extensive Documentary: Covid-19 Vaccine Biotechnology Explained & An Overview of New Technologies & Implications
By Avalerion Awakes Many people will be familiar with Dr. Carrie Madej's 'Mens 2.0' video statement & emergency call to the world that has been circulating on the internet for about three quarters of years. Dr. Carrie Madej is a medical in-house specialist and has her own practice in McDonough, Georgia. She has been studying vaccines for at least 20 years. […]
Follow us on social media

Spanish
wpDiscuz
9
0
What is your response to this?x
()
x
| Reply