SPD exceeds CDU/CSU for the first time since 2002.

The German elections are coming up soon, on Sunday 26 September the Germans will go to the polls to elect a new Bundestag, and indirectly also the successor of Chancellor Angela Merkel.

The elections will largely revolve around choosing Angela Merkel's successor as Chancellor of the Federal Republic of Germany. There are three major candidates for Chancellor:

Armin Laschet (CDU/CSU), leader of the Christian Democratic Union (CDU), and candidate for chancellor for the CDU/CSU alliance. Laschet is the incumbent Prime Minister of the state of North Rhine-Westphalia. He became discredited a few weeks ago after laughing behind the German Federal President as the president talked about flood victims in states such as Rhineland-Palatinate and North Rhine-Westphalia, of which Laschet is the leader. Laschet was elected leader of the CDU, the party of Chancellor Angela Merkel, in January and ended up in a power struggle with Bavarian Prime Minister and CSU leader Markus Söder. A power struggle that ended with a vote within the national party leadership, which Laschet won 31 to 9.

Olaf Scholz (SPD), Vice Chancellor of Germany under Angela Merkel, incumbent Minister of Finance, member of the Social Democratic Party SPD (Sozialdemokratische Partei Deutschlands). Within his party he is seen as part of the 'conservative wing', but outside he is better seen as a socialist. Scholz wants a minimum wage of 12 euros per hour, the state must appropriate more land aimed at the 'public interest' and the SPD states that after the 'corona crisis' they need more than a course correction, but fundamental changes.

Annalena Baerbock (Grune), co-leader of the Bündnis 90/Die Grünen. Baerbock is a climate activist and member of the Bundestag since 2013. She was elected chancellor candidate within her party on June 12, 2021 with 98,5 percent of the vote. Baerbock has been discredited three times since May for late reporting 25.500 euros as 'additional income' over the course of three years in her position as leader of the Grünen, in June it was revealed that she had lost her role in the German Marshall Fund and the United Nations High Commissioner for Refugees (UNHCR) had exaggerated, and again in June her recent publication came under fire for plagiarism.

According to the Politbarometer, Olaf Scholz (SPD) tops the polls for who German voters prefer as Chancellor after September 26, in which Scholz has built up a big lead over Armin Laschet and Annalena Baerbock.

Germany thus seems ready for a socialist Chancellor after 16 years of Angela Merkel. Voters really seem to be done with the CDU/CSU now, at least as Chancellor. That partly explains why Armin Laschet is so low. He made several mistakes during the campaign, such as the aforementioned laughter during an emotional press conference by the German Federal President about the floods that killed 196 people: 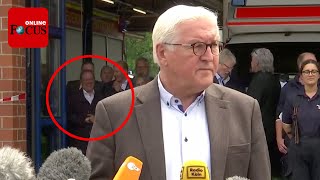 In recent days, incumbent Chancellor Angela Merkel has begun ramping up the election campaign, seeking to raise the public profile of the CDU/CSU through its actions in dealing with the July flood damage, to be more publicly active for her party.

The polls for the Bundestag itself show that the CDU/CSU and the SPD are neck-and-neck for the most votes in September.

CommonSenseTV follows the German Elections closely and will inform you as soon as new information comes out.

Spanish
wpDiscuz
9
0
What is your response to this?x
()
x
| Reply