The Hague hellhole and double hats 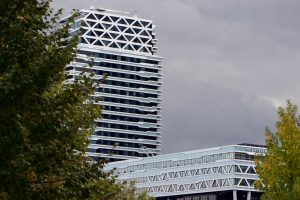 Through Willem Engel of Viruswaarheid, we learn that State Attorney Hans Besselink van Pels Rijcken also has a function as deputy judge. He would help litigate the farmers of their land, a task that Rob Jetten already committed himself to as a lobbyist in the House of Representatives, so that he was promoted to the Trilateral Commission. But who knew we also had a 'parliamentary lawyer'? And that she is involved in the CO2 scam for her office at the same time? 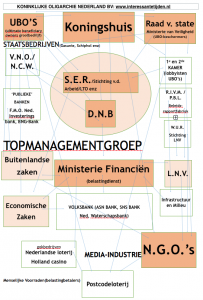 The Red Pill schedule: How the Netherlands is now organized

Royal Oligarchy BV
Reluctantly, by conducting research into the CO2 scam called 'climate policy', culminating in the Epoque 11 on the 2030 Agenda, we cracked 'the code': how the Netherlands 'functions'. Who has the real power, how corrupt is the business there in The Hague and outside it.

For example, we published a 'Red Pill' scheme about what we call 'De Koninklijke Oligarchie Nederland BV'. Calling the Netherlands a 'rule of law' and 'democracy' is a bit too optimistic. We appear to be a kind of one-party state, where politicians are mainly lobbyists for 'De Belangen'.

The lonely madman who still thinks he has to be 'representative of the people', he soon comes home from a cold fair. He will get no jobs, no supervisory directorships, and move on to the offices of the real power: the UBOs, Ultimate Beneficiary Owners of the large corporation, the old money around the supreme UBOs of the Orange family such as the Van Oord family, Fentener van Vlissingen and what new money was added to that. 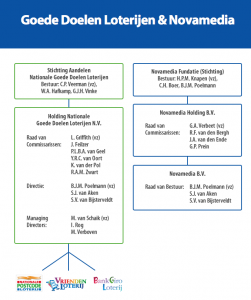 The PCL houses the lobbyists of large companies, such as the boss of ASR, and former politicians with various side jobs at Het Grote Geld BV.

For example, the fallen VVD MP Laetitia Griffith also fell. She got a managerial job at a UBO club, as chairman of the Supervisory Board of the Postcode Lottery. That is the million-dollar sluice towards the climate mafia, which lobbies for regulation on which the UBOs can cash out. Like the 'Green Deal' carbon scam.

And she could work at the KPMG. And last year she was able to get a supervisory directorship at the nationalized ABN AMRO bank.

ABN AMRO is the manager of Pels Rijcken's trust account foundation. And it was KPMG that would now investigate the fraud committed by Frank Oranje if, as boss of Pels Rijcken, he channeled a sloppy 10 million euros from clients through the third-party account to his fake holding…

After the Public Prosecution Service put the investigation on the back burner for a while.

Whether there is a direct conflict of interest there is well worth investigating. ABN AMRO is a state bank, Pels Rijcken is the state lawyer. There is an interest for Ferd Grapperhaus and cronies to cover up Frank Oranje's fraud, to portray it as the action of 'the lonely madman'. cover up.

That you put friends on your 'research' who help you to a friendly conclusion.

Or will KPMG still get the bottom stone out? It's not my file, the CO2 scam is enough corruption for me for the rest of my life. 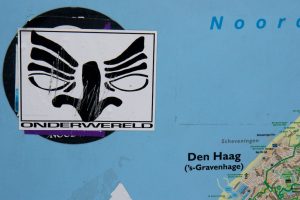 A good description of Hellehol The Hague

Now we get some other interesting information. Have you ever heard of a 'parliamentary lawyer', a lawyer who gets investigative assignments for those corporate lobbyists and nannies in parliament called 'De Tweede Kamer'. 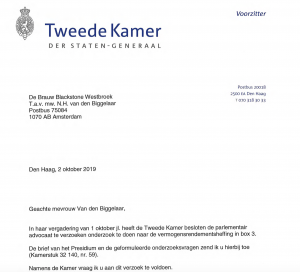 Never knew there was a parliamentary lawyer

Her name is Nicolien van den Biggelaar and she works for De Brauw Blackstone Westbroek. There she is responsible for the CO2 emissions trading that that office is setting up. Her Linkedin states:

She acts on behalf of both national and international companies and Dutch principals on the regulatory and environmental aspects of infrastructure projects, including energy plants, pipelines, electricity transmission systems, wind farms and harbor infrastructure.

Nicolien's practice focuses on various energy infrastructure projects and power plants, oil and gas companies, the chemical industry, pesticides and hazardous substances. In addition to advising clients on spatial planning and permits of large infrastructure projects, she represents clients in negotiations with regulatory authorities and in litigation before administrative and civil courts.

Her expertise is regularly called upon in M&A transactions and IPOs. Nicolien also remains at the forefront of De Brauw's CO2 emission trading practice.

She acts on behalf of national and international companies and Dutch clients in the field of regulations and environmental aspects of infrastructure projects, including power plants, pipelines, electricity transmission systems, wind farms and port infrastructure.

Nicolien's practice focuses on various energy infrastructure projects and power plants, oil and gas companies, the chemical industry, pesticides and hazardous substances. In addition to advising clients on spatial planning and  permits for major infrastructure projects, state  they assist clients in negotiations with regulators and in proceedings before administrative and civil courts.

Her expertise is regularly called upon in M&A transactions and IPOs. Nicolien also remains at the forefront of De Brauw's CO2 emissions trading practice. 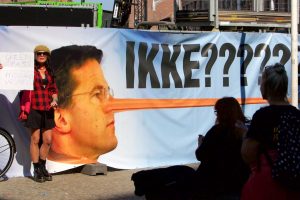 So a 'parliamentary lawyer', who ideally works for the People's Representation, is actually a core member of the Royal Oligarchy, 'at the forefront' of emissions trading (trading in hot air) that artificially makes products and services more expensive for the profits of the UBOs, bankers etc.

Because they now also want to make emissions trading personal, so that every resident of NL receives a kind of climate voucher card, which states how much CO2 you can still 'emit' before you have to pay extra.

Lawyers who represent private interests for the bosses of the government, such as Hans Besselink, can also become judges as a side job. This increases the chance that procedures will have the desired outcome, just like Marie Tan de Sonnaville's curfew, Marie's Urgenda process, Mr. Larissa Alwin's Milieudefensie trial, anything that benefits the CO2 scam. 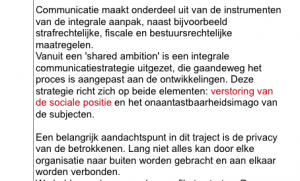 'Disruption of the social position': the RIEC

And thus the land robbery of farmers. Ultimately, lawyers also work for a court, so the separation of powers was not that great after all. In the RIEC, the public prosecutors also work together with mayors and the judiciary, for example to be able to bully stubborn writers like me through 'undermining'.

Then another robbery team comes to your door with all kinds of false accusations to intimidate you, or there comes another insane charge against you as if you have insulted 'the Jewish people', while your wife is Jewish. They do this to make their world 'safer' with 'safety regions'. 'Security' has become a euphemism for 'state terror' in Mafialand NL.

Prosecutors often also first do an internship at a law firm, it is 1 piece we know us, without any independent checks on integrity and conflicts of interest, let alone repercussions. You are judge for life. 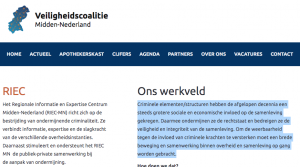 In short: once you've cracked the code, and you no longer believe the mainstream media's tales about 'rule of law' and 'democracy', then you understand that in the Netherlands, just like in Haiti, you simply live in a corrupt den of robbers, where people are very liberal. have beliefs about truth and integrity.

But then what do you have to do, besides shouting 'boo' on the internet? You quickly become such a sour protest writer and I don't feel like it. Life is way too short for that. We prefer to practice Kung Fu in nature. Much nicer. That 'the world' is rotten and corrupt, hasn't it always been the case?