The degree of censorship has been running out of control since the start of the Covid pandemic. So many content creators have been wiped from the YouTube domain. We know all about it, our own CommonsenseTV channel also had to believe it in October last year. Many people in the 'Truth Community' have died on YouTube, including David Icke, Max Igan, Jeff Berwick's The Dollar Vigilante, and recently James Corbett. And my own YouTube channel, Avalerion Awakes? The first video I ever posted on YouTube was censored after 2-3 days. So a good start… Then there were two more videos that were censored before I decided to stop putting energy into the platform and move on to freer platforms.

This week had to Flavio Pasquino's own Blckbx also believe in the censorship again. Fortunately, his YouTube channel is still standing with more than 104k subscribers, but his best-watched Blckbx interview ever was banned from YouTube this week. The interview 'Outcry to the world, from Israel !!' went all over the world and was almost 1.6 million viewswith more than 65K likes en tens of thousands of comments, the majority of which were very warm. Full of a collective consciousness and unification that transcends origin and religion. A miracle really.

In the interview 'Outcry to the world, from Israel !!' tells the brave Jewish Ilana Rachel Daniel a different story about what is happening in Israel than what we are presented with by the mainstream media (MSM). Surprise? Not really…

According to the MSM, things are going so well in Israel, right? The country with the largest Covid-19 vaccination coverage and is the population so satisfied with how things are going there?
They do not add that a medical apartheid was actually created in one day when the Green Pass, or the Covid-19 vaccination passport, was introduced. You cannot enter all kinds of shops and other public spaces without this vaccination passport. The believers among us who know the last book of the New Testament know what it is foreshadowing ...

They also do not tell anyone who enters the country and wants to stay in quarantine at home, instead of out of the house, must put on a tracking bracelet that reports their location to the authorities non-stop, so that you are locked up like a prisoner or an animal in your own home. all under the guise of safety. No, the MSM won't tell us.

Do they also add that the Israeli government has in fact contracted Pfizer to test their experimental Covid-19 genetic vaccines on the Israeli population? That the vaccines are actually still in the 3e sit in the test phase? No we are not told either. Do they also add that thousands of cases of serious, permanent vaccine injuries and deaths have been reported? Do they add that the Nuremberg Code of Medical Experiments and Informed Consent is clearly being widely exceeded and war crimes are being committed? No, they will of course not tell you all that. We would find out the truth anyway. That must be stopped at all costs!

And unity and awareness that transcends centuries to millennia old disputes and bloodshed? Of course that is not possible. Immediately delete and censor that trade!

In hindsight, it's actually a wonder that the interview survived over a month on YouTube and reached so many people. I can't help but believe that the Almighty had a hand in that. Seeds have been planted, connections made and we just continue on freer platforms and don't let ourselves be silenced.

Here you can still see the interview if you missed it. On Blckbx's own platform. That's how we do it! Who Else Needs YouTube? 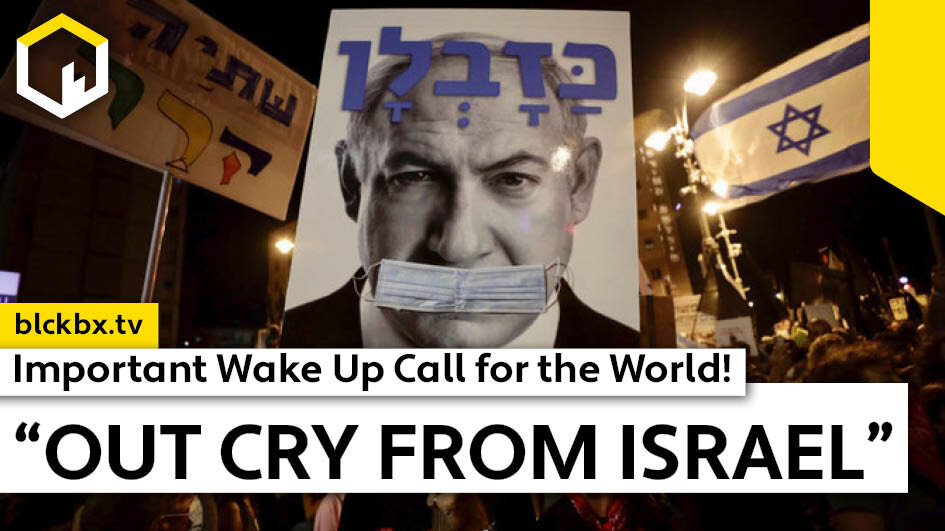 Important cry for help for the whole world, from Israel! - blckbx
Ilana Rachel Daniel gives an emotional cry for help from Jerusalem, the capital of Israel. At record speed, the government is trying to vaccinate the entire population - including pregnant women and small children - against the corona virus. “Civil rights are being pushed aside and people can

And Ilana? Her cry for help has now gone all over the world and she has been interviewed by Reiner Fullmich, Del Bigtree, Alex Jones, Sasha Stone and other big names among others. She has her own Telegram group where you can follow her. Her Telegram group consists of a nice collection of international contacts, with whom you can connect and keep up to date with what is happening outside our borders.

The Common Denominator
Voices of the People https://t.me/joinchat/UfvFcFg3ath4IqUe

Go soon Ilana en Avalerion Awakes also record a conversation. Keep an eye on our channels for when the time comes.

Blckbx will set up an independent news platform. Learn more about it here.